Kool & The Gang, Will Lee 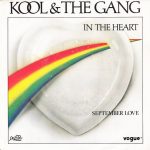 “(When You Say You Love Somebody) In the Heart” was the fourth single by Kool & The Gang. It was taken from their album In The Heart, released in 1983.

In the Heart is the fifteenth studio album by the funk band Kool & the Gang, released on November 21, 1983. The album became a hit and brought a return to the Billboard charts for the band. The hit love song, “Joanna”, soared to number two on the charts in the U.S. and UK, and […]