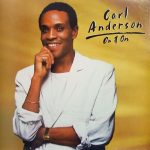 On and On is the second album by Carl Anderson, released in 1984 on Epic Records.

Carlton Earl “Carl” Anderson (February 27, 1945 – February 23, 2004) was an American singer, film and theater actor best known for his portrayal of Judas Iscariot in the Broadway and film versions of the rock opera Jesus Christ Superstar by Andrew Lloyd Webber and Tim Rice. Anderson and singer-actress Gloria Loring performed the duet “Friends and Lovers”, which reached No. 2 on the Billboard Hot 100 chart in 1986.