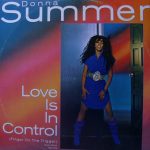 “Love Is in Control (Finger on the Trigger)” is a Grammy-nominated single from Donna Summer‘s self-titled 1982 album. The single was her 12th top 10 hit on the Billboard Hot 100 chart.

Summer’s 1980 The Wanderer album — her inaugural release on Geffen Records — had been certified gold in America although it did not enjoy numerous hit singles as some of her ’70s releases had enjoyed. Summer had prepped her next album, which would be released in 1996 as I’m a Rainbow — a double set which continued her association with Giorgio Moroder and Pete Bellotte, but David Geffen, decided to cancel the project, and assigned Summer to record an album with producer Quincy Jones. Jones was a much sought-after producer at the time, particularly due to his association with Michael Jackson’s album Off the Wall.

“Love Is in Control (Finger on the Trigger)” was the lead single off the Jones’ produced album Donna Summer. It was written by Jones and Rod Temperton (formerly of funk band Heatwave) — who’d also written Jackson’s “Rock with You”. Summer reports that the recording process for this album was challenging, as she was pregnant at the time and unhappy over I’m a Rainbow’ being shelved by Geffen Records.

The single was issued in three different versions: the 7″ single release (3:42), the LP version (4:19), and a 12″ single version (7:04). The 12″ version features a “Dance Remix” on Side One and an “Instrumental Version Featuring Ernie Watts On Sax Solo” on Side Two. Both are remixes by Craig Kostich and Bruce Swedien.