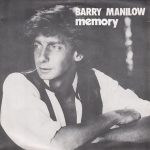 “Memory” is a show tune from the 1981 musical Cats. It is sung primarily by the character Grizabella, a one-time glamour cat who is now only a shell of her former self. The song is a nostalgic remembrance of her glorious past and a declaration of her wish to start a new life. Sung briefly in the first act and in full near the end of the show, “Memory” is the climax of the musical, and by far its most popular and best-known song. Elaine Paige originated the role of Grizabella in the West End production of Cats, the first to perform the song publicly on stage and bringing attention to its writers Andrew Lloyd Webber and Trevor Nunn, who received the 1981 Ivor Novello award for Best Song Musically and Lyrically.

Barry Manilow released a cover of “Memory” as a single in late 1982; this became the highest-charting version to date on the Billboard Hot 100 when it reached No. 39 in January 1983. Manilow’s recording also made the Top 10 on the Billboard adult contemporary chart, reaching No. 8. This version is included on his album Here Comes the Night.

Here Comes the Night is the twelfth album by singer-songwriter Barry Manilow. The album was recorded at Sound City Recording Studios in Van Nuys, California. The United Kingdom release went by the title “I Wanna Do It With You”. It was released in 1982, and it scored single platinum. The album has yet to be […]