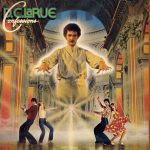 Confessions is the third album by D.C. LaRue, released in 1978 on Casablanca.

D.C. LaRue (born David Charles L’Heureux) (born April 26, 1948 in Meriden, Connecticut) is an American singer, songwriter and producer. His music was successful in clubs and on dance music charts worldwide during the 1970s and early 1980s.