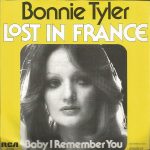 “Lost in France” is a song recorded by Welsh singer Bonnie Tyler. It was released as a single in September 1976 by RCA Records, written by her producers and songwriters Ronnie Scott and Steve Wolfe. “Lost in France” was Tyler’s second single and first chart hit in her career, which featured on her debut album The World Starts Tonight (1977). The lyrics depict Tyler in a daze due to love.

The song was praised by critics, though some preferred her follow-up single “More Than a Lover” for its controversial nature. “Lost in France” was a commercial success, certified Silver by the BPI for selling over 250,000 units. It peaked highest at number two in South Africa, and was also a Top 20 hit in a further six countries.

The World Starts Tonight is the debut studio album by Welsh singer Bonnie Tyler, released in February 1977 by RCA Records. Most of the songs were written by Ronnie Scott and Steve Wolfe, who worked as her managers while she was signed to RCA. They also produced the album alongside David Mackay. Musically, the album […]