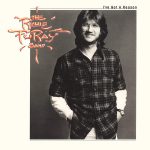 I’ve Got a Reason is the debut solo album by American singer-songwriter Richie Furay, released in 1976.

After leaving Poco in 1974 and the country rock supergroup Souther-Hillman-Furay Band, Furay released his first solo album which reflected Furay’s newfound Christian beliefs. He formed The Richie Furay Band with Jay Truax, John Mehler, and Tom Stipe. To support the release of this album Furay formed an alliance with David Geffen and Asylum Records. Furay assured Geffen that his album would be Christian influenced but would not be an attempt to preach his newfound beliefs. After two tours and two more releases on the Asylum label during the late 1970s, he left the music business and became a minister.