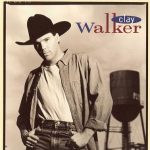 Clay Walker is the debut studio album of American country music singer Clay Walker. It was released in 1993 on Giant Records and produced by James Stroud. The album produced four singles on the Billboard country music charts, of which three — “What’s It to You”, “Live Until I Die” and “Dreaming with My Eyes Open” — reached Number One. Respectively, these were the first, second, and fourth singles from the album. The third single, “Where Do I Fit in the Picture”, peaked at #11. Additionally, “White Palace” peaked at #67 based on unsolicited airplay.