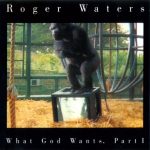 “What God Wants, Part I” is the first song in a series of songs written and released by former Pink Floyd bassist, Roger Waters on his third solo album, Amused to Death. “What God Wants” is separated into three parts, similar to Pink Floyd’s earlier “Another Brick in the Wall.”  Though the song is in three parts, “What God Wants Pt. 1”, was the only one to be released as a single. The song features the guitar playing of Jeff Beck. This part in particular deals with the contradictory duality and hypocrisy perceived by Waters in dogmatic religion and its power over man. The following parts, along with other songs on the album, deal with worship not only in religion but also in regard to materialism and consumption. All together, its viewpoint is on the power of simplistic conformity; how people adhere to something, not entirely by volition, but out of submission.