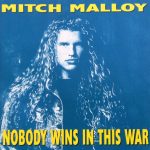 “Nobody Wins This War” is the second single from the selftitled album by Mitch Malloy, released in 1992.

Mitch Malloy is the self-titled debut album by AOR singer-songwriter Mitch Malloy. It featured 11 songs, all of which were co-written by Malloy himself and produced by engineer Sir Arthur Payson (according to Malloy, it was the first album Payson had produced on his own without his mentor, Desmond Child). The record’s first single, the […]