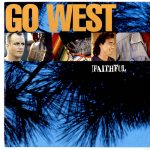 “Faithful” is a song performed by Go West. The song is the opening track on the band’s fourth album Indian Summer and serves as the album’s lead single. Written by the band and Martin Page and produced by Peter Wolf, the song reached the top 20 in New Zealand, the United Kingdom, and the United States. Its highest chart position was in Canada, where it peaked at number two on February 6, 1993 for one week. It also reached number three on the adult contemporary charts of both Canada and the United States.