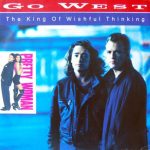 “King of Wishful Thinking” is a 1990 song by the British pop duo Go West. It was featured in the film Pretty Woman and appeared on its soundtrack. It was later featured on Go West’s fourth studio album, Indian Summer, in 1992.

The song was written by Peter Cox, Richard Drummie and Martin Page. It reached number two in Canada, number 6 in Australia, number 8 in the US, and number 18 in the UK. At the 1991 Brit Awards the song was nominated for the Brit Award for British Video of the Year.