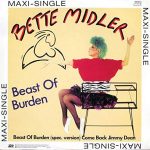 In 1984, the song was covered by Bette Midler. Her version, which reached #71 on Billboard’s Hot 100, modified several lines of lyric (for example, changing “Pretty, pretty, girls” to “my little sister is a pretty, pretty girl”). The track appeared on Bette Midler’s No Frills album.

A music video was made for this version that started out with Bette and Mick Jagger talking in her dressing room before she comes out and performs the song with him on stage. As the song ends someone throws a pie at Mick, and Bette laughs at it until she gets hit with a pie herself. The video ends with a picture of both of them covered in pie in a newspaper with the headline “Just desserts”.

No Frills is the sixth studio album by American singer Bette Midler, released on Atlantic Records in 1983. No Frills was Midler’s first studio album in four years, following the movies The Rose, Divine Madness! and the ill-fated Jinxed!. The rock and new wave influenced album was produced by Chuck Plotkin, best known for his […]