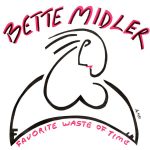 “You’re My Favorite Waste of Time” (also known as “My Favourite Waste of Time”) is a song written and first released by American singer Marshall Crenshaw. His 1979 home demo of the song was released as the B-side of his 1982 hit “Someday, Someway” and is available on his compilations The 9 Volt Years and This Is Easy: The Best of Marshall Crenshaw.

Written by Crenshaw while in Beatlemania, the song was inspired by the Hollies and featured tongue-in-cheek lyrics about his wife. The song, though originally a B-side, would later be covered by many artists, including Owen Paul, who reached number 3 in Britain with his rendition.

Bette Midler covered this song for her album No Frills, released in 1983.

No Frills is the sixth studio album by American singer Bette Midler, released on Atlantic Records in 1983. No Frills was Midler’s first studio album in four years, following the movies The Rose, Divine Madness! and the ill-fated Jinxed!. The rock and new wave influenced album was produced by Chuck Plotkin, best known for his […]