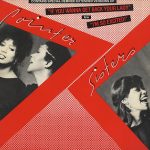 “If You Wanna Get Back Your Lady” is a single by The Pointer Sisters, taken from their album So Excited!, released in 1982.

So Excited! is the ninth studio album by The Pointer Sisters, released in 1982 on the Planet label. So Excited! spawned a major hit with “American Music” and included a cover of a Prince tune, “I Feel for You,” which was again covered by Chaka Khan two years later. The title track reached #30 on […]