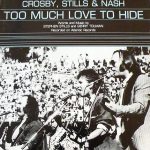 “Too Much Love to Hide” is the third single by Crosby, Stills & Nash from their album Daylight Again, released in 1982.