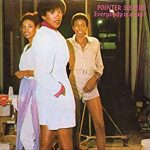 “Everybody Is a Star”, released in December 1969, is song written by Sylvester Stewart and recorded by Sly and the Family Stone.

The song has been covered by several acts, including The Jackson 5, The Pointer Sisters, Gladys Knight & The Pips, Madonna, Fishbone with Gwen Stefani and Family Stone member Rose Stone, and others.