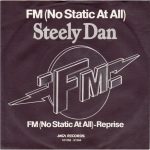 “FM (No Static at All)” is a song by American jazz-rock band Steely Dan, the title theme for the 1978 film FM. It made the US Top 40 that year when released as a single, a success relative to the film. Musically, it is a complex jazz-rock composition driven by its bass, guitar and piano parts, typical of the band’s sound from this period; its lyrics look askance at the album-oriented rock format of many FM radio stations at that time, in contrast to the film’s celebration of that medium.[

“FM” was the first single Steely Dan released on MCA Records (which had released the soundtrack), predating MCA’s acquisition of ABC Records, the band’s previous label, by a year. At the time of its release, the band’s album Aja was enjoying critical and commercial success, leading some listeners to incorrectly assume that “FM” was also on that album. Since then it has been included on some of the band’s compilation albums.

However, “FM” had been recorded during the same sessions as Aja, using some of the same studio musicians and recording personnel, in addition to band members and songwriters Walter Becker and Donald Fagen. Among them were saxophonist Pete Christlieb and drummer Jeff Porcaro; several members of the Eagles sang backing vocals.

It was the first time Becker and Fagen had written music for a film since 1971’s You’ve Got to Walk It Like You Talk It or You’ll Lose That Beat, a year before Steely Dan’s debut album. It also features a string section arranged and conducted by Johnny Mandel, only the second time the band had used strings in a song. Lastly, it is the only time that Becker (bass and guitar) and Fagen (piano) handled most of a song’s instrumental work themselves. Engineer Roger Nichols won that year’s Grammy Award for Best Engineered Recording, Non-Classical for his work on “FM”, the only time that award was ever given for a single song

FM is a 1978 film directed by John A. Alonzo and starring Michael Brandon, Eileen Brennan, Alex Karras, Cleavon Little, Martin Mull, and Cassie Yates. The screenplay was written by Ezra Sacks. This film was produced by Universal Pictures and originally released to theaters in the spring of 1978. The story unfolds across a background […]