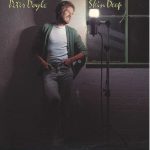 Skin Deep is the second by Peter Doyle, released in 1977.