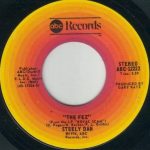 The Fez is the second sing from the Steely Dan album The Royal Scam, released in 1976.