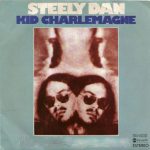 “Kid Charlemagne” is a song by the rock group Steely Dan, which was released as a single from their 1976 album The Royal Scam and reached number 82 in the Billboard charts. It is a fusion of a funk rhythm and jazz harmonies with rock and roll instrumentals and lyrical style. The guitar solo by jazz fusion guitarist Larry Carlton was ranked #80 in the list of the 100 greatest guitar songs by Rolling Stone, stating “In the late seventies, Steely Dan made records by pushing a revolving crew of monster session dudes through take after take, which yielded endless jaw-dropping guitar solos. Larry Carlton’s multi-sectioned, cosmic-jazz lead in this cut may be the best of all: It’s so complex it’s a song in its own right.