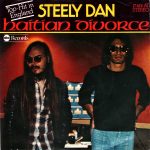 “Haitian Divorce” is the third single from the Steely Dan album The Royal Scam, released in 1976.

Through the years, Mr. Scheiner has worked with a veritable Who’s Who of artists, but his relationship with Fagen stretches way back to the early Steely Dan era. Serious fans like us (every Mixmaster Lassa “-of-The-Year” compilation disk has included at least one song from the Steely Dan/Fagen repertoire) will be interested to learn it was Scheiner’s Haitian divorce that inspired that Royal Scam album tune of 1976. His lawyer advised him to finalize his divorce before the end of the year, and Haiti provided on-the-spot service. Just bring notarized paperwork, the judge forks over an elaborate wax-sealed document, and then there’s a big party. Some years later, Scheiner was set up on a blind date by his pals, as a joke, with a girl 11 years his junior. They had nothing in common, they couldn’t dance together, and for heaven’s sake, she’d never heard of Aretha Franklin-the Queen of Soul. Yep, it inspired 1980’s “Hey Nineteen” released on the album Gaucho.