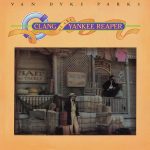 Clang of the Yankee Reaper is the third studio album by Van Dyke Parks, released in 1976 with only one original Parks composition. It continues his exploration of calypso music started in the previous album Discover America (1972). In particular, it contains several songs by Mighty Sparrow and Lord Kitchener, as well as a diverse selection of past and present music in the tradition of the Americas. The album was dedicated to the late Frederick Mears Wainwright.

Parks has reflected harshly of the album years later, describing it as “brain dead”. He added, “That album was done at the nadir of my entire life. Psychologically I was in a terrible state, I was despairing. My best friend had just died – my roommate, he was my roommate. We scattered his ashes at sea, and they flew back into our faces… a terrible, terrible insult. I was grieving, I’d just been divorced, I’d just left Warner Brothers in disgust as I didn’t want to be a corporate lackey, didn’t approve of record business practices – you know, what can I say? ‘Lost my job, the truck blew up, my dog died.'”

The title is taken from a poem by Parks’ great-uncle Will Carleton.