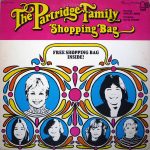 Shopping Bag is the fifth album by The Partridge Family released in March 1972. It reached #18 on the Billboard album charts in the US and spent a total 17 weeks on the chart and was certified Gold. The vinyl release of the album contained a novelty plastic shopping bag.

As with most Partridge Family albums, several well-known songwriters contributed songs to the album. Perhaps the most famous were Tommy Boyce and Bobby Hart, who gave the album the track “Girl, You Make My Day.” Tony Romeo, another prolific songwriter, contributed several tracks to the album.