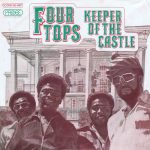 “Keeper of the Castle” is a song recorded and released by American singing group The Four Tops, notable as the first hit the group scored on the ABC-Dunhill label after leaving Motown in 1972. The song, a social commentary on men’s roles in relationships, was co-written by Dennis Lambert, who also produced the song and other songs off their album of the same name. Upon its release, the single peaked at number ten on the US pop chart and number seven on the R&B charts.[1] Overseas, “Keeper of the Castle” peaked at number eighteen on the UK pop chart.