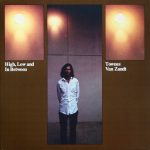 High, Low and In Between is an album by country singer/songwriter Townes Van Zandt, released in 1971. The album was recorded in L.A. and showcases what Van Zandt himself considered to be one of his most well written songs, “To Live Is To Fly”.