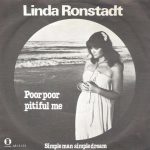 “Poor Poor Pitiful Me” is a rock song written and first recorded by American musician Warren Zevon in 1976.

With genders reversed, it was made a hit twice: first as a top-40 hit for Linda Ronstadt, then over a decade later by Terri Clark, whose version topped the Canadian country charts and reached the country top five in the U.S.