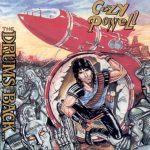 The Drums Are Back is the fourth solo album by drummer Cozy Powell, released in 1992

Colin Trevor “Cozy” Powell (29 December 1947 – 5 April 1998) was an English rock drummer, who made his name with many major rock bands like The Jeff Beck Group, Rainbow, Robert Plant, Whitesnake and Black Sabbath. Powell had appeared on at least 66 albums, with contributions on many other recordings. Many rock drummers have cited him as a major influence.

1 The Drums Are Back

3 I Wanna Hear You Shout

6 Legend Of The Glass Mountain