1990 Everything But The Girl – The Language Of Life 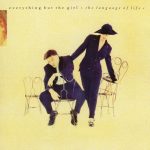 The Language of Life is the fifth studio album by British musical duo Everything but the Girl. It was released on 5 February 1990 by Atlantic Records and Blanco y Negro Records.

The Language of Life became Everything but the Girl’s second album to surpass sales of 500,000 copies, but the album divided the group’s British fanbase. In 2012, group member Tracey Thorn described The Language of Life as “a slightly slick, kind of semi-jazzy, sophisticated record” and recalled that it “was a definite attempt to try and do something that had a character to it, but in retrospect when we were asked why we had taken that direction, we couldn’t entirely say why”

Producer Tommy LiPuma had previously worked with artists like Miles Davis, Horace Silver, Randy Newman, and George Benson, and had contributed production to Aztec Camera’s 1987 album Love. He had expressed an interest in producing Everything but the Girl, and Tracey Thorn and Ben Watt, feeling that they had lost their place within the UK music scene, contacted him and asked him if he wanted to hear some demos. He invited them to New York City, and then to Los Angeles, where they would eventually record The Language of Life.

3 Meet Me in the Morning

5 The Language of Life