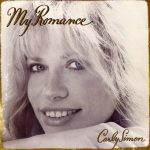 My Romance is an album by the U.S. singer-songwriter Carly Simon, released in 1990. It is her fourteenth studio album, and her sixteenth album overall, as well as being her second album devoted to standards.

The album peaked at No. 46 on the Billboard 200, and remained on the chart for 17 weeks. Simon’s version of In the Wee Small Hours of the Morning from this album was featured in the hit 1993 film Sleepless in Seattle, as well as being included on the film’s soundtrack album.

3 When Your Lover Has Gone

4 In The Wee Small Hours Of The Morning