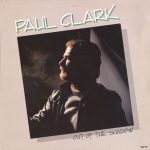 Out of the Shadow is the tenth album by Paul Clark, released in 1984.

Paul Clark is a musician who was involved in the Jesus music movement and early contemporary Christian music industry. He was born in Kansas City and recorded his first album in 1971, Songs from the Saviour Vol 1. Its songs became one of the first signs of the growing “Jesus Movement” of the early 70s.

1 Give Me Your Heart

3 Out Of The Shadow

8 I Need Your Love Again

9 Love Of My Life