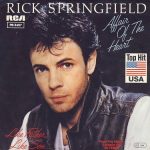 “Affair of the Heart” is a hit song performed by rock musician Rick Springfield. It was released as the lead single from his Platinum-certified Living in Oz album and was written by Rick Springfield, Danny Tate and Blaise Tosti.

“Affair of the Heart” was nominated for a Grammy Award for Best Male Rock Vocal Performance in 1984, but lost to “Beat It” by Michael Jackson.

Living in Oz is an album released by rock musician Rick Springfield in 1983. The album was quickly certified Platinum in America. In 1984, Springfield was nominated for a Grammy Award for Best Male Rock Vocal Performance for the “Affair of the Heart” single, which peaked at number nine on the Billboard Hot 100 and […]