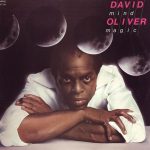 Mind Magic is the second album by vocalist David Oliver. It was released in 1979 on Mercury Records

David Oliver (January 8, 1942 – June 6, 1982) was a soul singer best known for the quiet storm radio hit, “Ms” as well as his composition “Friends & Strangers”, which was covered by Ronnie Laws in 1977. He also recorded the first version of the Cecil Womack song “Love TKO”, releasing it as an album track on Here’s To You in 1980.