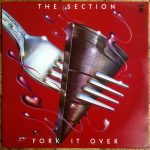 Fork it over is the third album by The Section, released in 1977 on Capitol Records.

he Section were a US instrumental rock band formed in the early 1970s by guitarist Danny Kortchmar, keyboardist Craig Doerge, bassist Leland Sklar, and drummer Russ Kunkel. They are best known for both studio and stage work in support of some of the best selling singer/songwriters and solo singers of that decade.