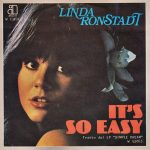 “It’s So Easy!” is a rock-and-roll song written by Buddy Holly and Norman Petty. It was originally released as a single in 1958 by the Crickets, which failed to chart. it was the final release by the Crickets when Holly was still in the band.

Linda Ronstadt recorded “It’s So Easy” in 1977 for her album Simple Dreams, produced by Peter Asher. Her recording was released as a single by Asylum Records in the autumn of that year. It hit the Billboard Top Five simultaneously with her recording of “Blue Bayou”. It also reached number 9 in Canada and number 11 in the United Kingdom. Ronstadt’s version was used in the 2005 film Brokeback Mountain.