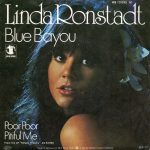 “Blue Bayou” is a song written by Roy Orbison and Joe Melson. It was originally sung and recorded by Orbison, who had an international hit with his version in 1963. It later became Linda Ronstadt’s signature song, with which she scored a charting hit with her cover of “Blue Bayou” in 1977. The song has since been recorded by many other artists.

Linda Ronstadt took the song to number 3 on the Billboard Hot 100 in late 1977, where it held for three weeks, as well as number 2 Country and number 3 Easy Listening. It also reached number 2, for four weeks, on the Cash Box Top 100 chart.

The single was RIAA certified Gold (for sales of over 1 million US copies) in January 1978. It was the first of Ronstadt’s three Gold singles. Don Henley of the Eagles sang backup on the recording. “Blue Bayou” was later certified Platinum (for over 2 million copies sold in the United States). It was a worldwide smash and was also popular in a Spanish-language version called “Lago Azul”