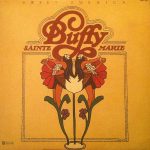 Sweet America was the twelfth studio album by Buffy Sainte-Marie and her last before retiring from music to work on Sesame Street and in education. The album was dedicated to the American Indian Movement and featured some songs with tribal rhythms and vocals that she was later to develop on her 1992 comeback Coincidence and Likely Stories.

After parting with MCA Records, Sainte-Marie signed with ABC Records, then home of such artists as Steely Dan, the early Pointer Sisters, Isaac Hayes and the James Gang. Although Sweet America received a little more attention from the press than her two MCA albums Buffy and Changing Woman, most reviews were not favorable. When MCA acquired ABC Records in 1979, Sweet America went out of print along with her two MCA albums, and remaining copies were not thereafter circulated. Claims that her retirement was motivated by the collapse of ABC Records are unlikely because she had not been recording for over three years when the label collapse

6 Look At The Facts

7 I Don’t Need No City Life

10 Honey Can You Hang Around

13 Ain’t No Time For Worryin’ Blues

1976 Earl Klugh – Living Inside Your Love