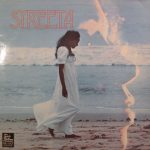 Syreeta is the debut studio album by American R&B and soul singer and songwriter Syreeta Wright, released on June 20, 1972 on MoWest, a subsidiary of Motown Records.

The self-titled debut album was produced by Wright’s ex-husband, frequent collaborator and musician Stevie Wonder, it was released following the former couple’s separation and subsequent divorce. The album featured compositions by both Wonder and Wright, and also featured Wright’s takes on other artists’ songs including a Wonder-produced funk-oriented version of his earlier recording, “I Love Every Little Thing About You”, which was initially recorded by Wonder for his Music of My Mind project, released earlier that year. Wonder and Wright used the talk box prominently on Wright’s cover of The Beatles’ “She’s Leaving Home” while Wright provided a smoother vocal take of Smokey Robinson’s “What Love Has Joined Together”. Wright wrote the ballad “Happiness” and she and Stevie co-wrote “Baby Don’t You Let Me Lose This” and their featured duet “To Know You Is to Love You” together. The album failed to generate success though Wright would go on to a productive solo career throughout the 1970s and 1980s. Wright and Wonder would continue working together for several decades.

1 I Love Every Little Thing About You

5 What Love Has Joined Together