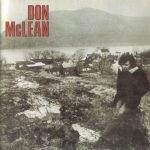 Don McLean is an album by American singer-songwriter Don McLean, released in 1972, peaking at number 23 on the Billboard 200 chart. It was reissued by BGO Records in 1996. The photo on the cover of the album was taken overlooking the Village of Cold Spring, NY.

3 Oh My What A Shame