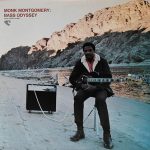 Bass Odyssey is an album by jazz bassist Monk Montgomery, one of his four solo albums. It was released in 1971 on Motown Records/Chisa Records.

The album was produced by Stewart Levine, and Wayne Henderson of The Crusaders. Henderson also plays on the album with fellow Crusaders Joe Sample and Stix Hooper