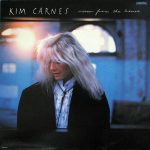 View from the House is the eleventh studio album by American singer-songwriter Kim Carnes. It was released on 25 July 1988 by MCA Records. The album marked a return to her early country music roots. Carnes recorded the album in Nashville, Tennessee, and co-produced the album with Jimmy Bowen. Prior to making the album, Carnes stated, “I can’t do another album here (in Los Angeles). I’ve tried and finally stopped. The only way I get a thrill out of recording is to record live as opposed to running everything through a computer. I want to feel that interplay between musicians. And I feel real strongly that Nashville is the place to make an album with real instruments.”

View from the House received positive reviews, with music critics praising Carnes’s cover songs. The album reached number 39 on the Billboard Top Country Albums chart, and contained two hit singles. “Crazy in Love” and “Speed of the Sound of Loneliness” both charted on the Billboard Hot Country Singles & Tracks at number 68 and number 70 respectively. “Crazy in Love” also reached number 13 on the Adult Contemporary chart.

2 Just To Spend Tonight With You

5 If You Don’t Want My Love

6 Willie And The Hand Jive

7 Speed Of The Sound Of Loneliness

10 Crimes Of The Heart