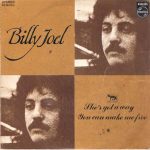 “She’s Got a Way” is a song by American singer-songwriter Billy Joel, originally released on his first solo album, Cold Spring Harbor (1971) and as a single from that album in some countries. It was also featured as a single from the 1981 live album Songs in the Attic, peaking at number 23 on the Billboard Hot 100 chart in early 1982.

Cold Spring Harbor is the debut studio album by American recording artist Billy Joel, released on November 1, 1971 by Family Productions. Cold Spring Harbor was named after a hamlet of the same name in the Town of Huntington, New York. It is located on Long Island Sound near Joel’s hometown. The front cover was […]