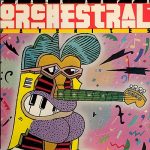 Orchestral Favorites is an album by Frank Zappa first released in May 1979 on his own DiscReet Records label. The album is instrumental and features music performed by the 37-piece Abnuceals Emuukha Electric Symphony Orchestra.

In early 1976, Zappa’s relationship with manager and business partner Herb Cohen ended in litigation. Zappa and Cohen’s company DiscReet Records was distributed by Warner Bros. Records. When Zappa asked for a reassignment of his contract from DiscReet to Warner in order to advance the possibility of doing special projects without Cohen’s involvement, Warner briefly agreed. This led to the 1976 release of Zoot Allures on Warner. Early in 1977, Zappa delivered the master tapes for a quadruple-LP set, entitled Läther. However, Warner changed its position following legal action from Cohen, and refused to release the album, claiming that Zappa was contractually bound to deliver four more albums to Warner for the DiscReet label.