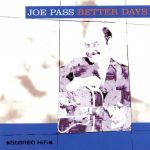 Better Days is an album by guitarist Joe Pass, released in 1971.

Joe Pass (born Joseph Anthony Jacobi Passalaqua; January 13, 1929 – May 23, 1994) was an American jazz guitarist of Sicilian descent. He is considered one of the greatest jazz guitarists of the 20th century.  He created possibilities for jazz guitar through his style of chord-melody, his knowledge of chord inversions and progressions, and his use of walking basslines and counterpoint during improvisation. Pass worked often with pianist Oscar Peterson and vocalist Ella Fitzgerald.