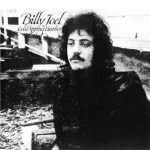 Cold Spring Harbor was named after a hamlet of the same name in the Town of Huntington, New York. It is located on Long Island Sound near Joel’s hometown. The front cover was photographed at Harbor Road in Cold Spring Harbor.

His song “Tomorrow Is Today” drew from his period of depression and hospitalization the year before. Joel later released live versions of “She’s Got a Way” and “Everybody Loves You Now”, first included on this album, in his Songs in the Attic (1981), recorded in live performaces. “She’s Got a Way” was also released as a single in early 1982, and peaked at No. 23 on the Billboard Hot 100 chart.

Through an error in the album’s mastering, the songs played slightly too fast, causing Joel’s voice to sound unnaturally high (one-half of a semitone higher—Joel joked that he sounded more like one of Alvin and the Chipmunks than himself). According to a long-standing rumor, when Joel first heard the finished product, he “ripped it off the turntable, ran out of the house, and threw [the record] down the street.” Arthur “Artie” Ripp, owner of Family Productions and hence the owner of the original master tapes, was responsible for the production error, and the mistake cost him his friendship with Joel. He had originally signed the 22-year-old Joel to a ten-record contract that stripped Joel of all rights to the original tapes and to the publishing rights to all current and future songs.

As part of a deal with Columbia Records to release Joel from his contract, Ripp was still able to collect royalties on sales of Joel’s records long after Joel’s acrimonious departure from Family Productions (up until 1986’s The Bridge). Ripp only sold the publishing rights to Joel’s song catalog back to Joel reluctantly after intense pressure from CBS/Columbia Records president Walter Yetnikoff, who claimed he had to threaten Ripp to finalize the deal.