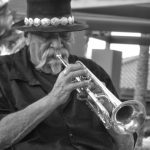 Steve played trumpet on most of Stevie Wonders recordings during the innovative and creative period between 1971 and 1976. Stevie was experimenting with electric keyboards and synthesizers, which Steve witnessed and took part in, including working on the classic album Songs in the Key of Life. Steve worked with a long list of performers during his extensive career including The Rolling Stones, Janis Joplin and Paul Butterfield’s Blues Band. (Source)

1977 Eric Carmen – Boats Against the Current

1979 Dusty Springfield – Living Without Your Love

1979 Roger Miller – Making A Name For Myself