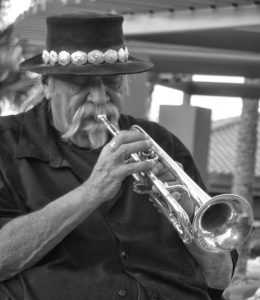 Steve played trumpet on most of Stevie Wonders recordings during the innovative and creative period between 1971 and 1976. Stevie was experimenting with electric keyboards and synthesizers, which Steve witnessed and took part in, including working on the classic album Songs in the Key of Life. Steve worked with a long list of performers during his extensive career including The Rolling Stones, Janis Joplin and Paul Butterfield’s Blues Band. (Source)

Born and raised in Brooklyn, New York with one brother and two sisters, Steve Madaio started playing the trumpet when he was six years old. “My father gave me one trumpet lesson and told me that if he taught me trumpet, I would start to hate it. So my parents gave me a great start by hiring some of the best teachers in the world. I was studying to be a classical musician.”
At the age of fifteen, he was playing in the orchestra for Broadway plays; “Man of La Mancha” and “Promises”. At the age of seventeen, he performed with the Paul Butterfield Blues Band at the Monterey Pop Festival and then later joined the band and performed with them at Woodstock in 1969. After high school, he attended Mannes College The New School For Music in New York City. He continued playing in Broadway shows and then started playing Rock and Roll shows. “I played a show with Screamin’ Jay Hawkins at the Paramount Theater. When I saw him come on the stage with a cape on and wearing feathers, I said, this is it, this is what I want to do!”
A very talented and diverse musician, Madaio toured with the Beach Boys; and recorded and toured with Janis Joplin; while still playing with Lionel Hampton, the Buddy Rich Band and the Woody Herman Band. “I came to the point where the Big Bands didn’t interest me any more, I was enjoying the Rock and Roll lifestyle.” In 1970 he started performing with Stevie Wonder and the Wonderlove Band. They were the opening act for the Rolling Stones during their American Tour in 1971. Band members included David Sanborn on saxophone, Ray Parker on guitar and Denise Williams sang background vocals. He was on several of Stevie Wonder albums from “Superstition” to “Songs of the Key of Life” and all the ones in between.
He moved to Los Angeles in 1973 at the request of Lou Adler, where he recorded the original soundtrack for “The Rocky Horror Picture Show” in 1974. Ever since high school he wanted to be a session musician, and he is living his dreams. He has performed on so many albums the list is too long to mention. I suggest you visit: wwwSpotlightHeroes.com and go to Steve Madaio. There you will see a long list of albums he performed on. He has recorded sessions for John Lennon; Harry Nilsson; The Rolling Stones; Bob Dylan; David Bowie; Donna Summer; Earth, Wind and Fire; Bonnie Raitt; Barbra Streisand; Dr. John and the Night Trippers; to name a few.
He moved to Palm Springs in 1994 because he loved the community. Madaio started performing with pianist Yarek Urant at San Tropez, a hot spot for great music and dining, He purchased the venue and it became Madaio’s San Tropez, now the Back Street Bistro. Many of his musician friends would stop by including Stevie Wonder, Ray Brown, Conti Condoli, Pete Condoli, Kenny Rankin, Glen Fry, Pat Rizzo, Andy Fraga and Patrick Tuzzolino, to name a few. As a matter of fact, I met drummer Chiz Harris there. That was the first time in my life I could feel the drums “talk” when they were played by him. (Source)