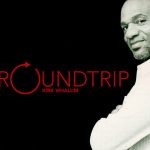 Roundtrip is the 15th album by Kirk Whalum. It was released in 2007.

Kirk Whalum (born July 11, 1958) is an American jazz saxophonist and songwriter. He toured with Whitney Houston for more than seven years and soloed in her single “I Will Always Love You”, the best-selling single by a female artist in music history. He was also featured on many Luther Vandross albums, most often playing on the singer’s covers of older pop and R&B standards such as “Anyone Who Had a Heart”, “I (Who Have Nothing)”, and “Love Won’t Let Me Wait”.