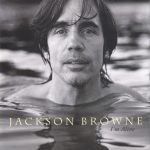 I’m Alive is the tenth album by American singer-songwriter Jackson Browne, released in 1993. The title track, “I’m Alive”, reached No. 18 on the Album Rock Tracks chart and No. 28 on the Adult Contemporary chart. Other singles released from the album were “Everywhere I Go” (UK No. 67) and “Sky Blue and Black”.

After veering heavily towards songs of a political nature on his two previous albums, longtime fans of Browne welcomed the return on I’m Alive to his previous style of songwriting.

In an interview on Off Camera with Sam Jones, Jackson Browne stated that the song “I’ll Do Anything” was originally written to be the title song for the James L. Brooks movie of the same name. It was to be a comedic song sung by Albert Brooks where he is begging a test audience to favorably review his latest film.

The album was certified as a gold record in 1995 by the RIAA.

2 My Problem Is You