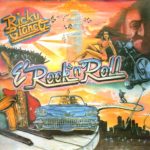 Ricky Gianco (born Riccardo Sanna, Lodi 1943), formerly known as Ricky Sanna, is an Italian singer, songwriter, guitarist and record producer, considered one of the founders of Italian rock music. He reached the apex of his popularity as a singer in the 1960s, when he was one of the so-called “urlatori” (literally: “screamers”), a group of early rock singers which also included Adriano Celentano, Little Tony, Tony Dallara, and others.

In his early career, between the late 1950s and the early 1960s, Gianco played in several bands, including “I Ribelli”, “I Quelli” (which would later develop into Premiata Forneria Marconi), and Celentano’s Clan Celentano. He also collaborated with Luigi Tenco, Enzo Jannacci, and Gino Paoli, among others. His most renowned solo works are from the mid-1960s, when he became a declared imitator of The Beatles.

In the 1970s, he began expanding his range activities, working on theatre projects and as a record producer as well as a musician.